The Mayan city of  Tulum stands 80 miles south and 700 years away of Cancun. But the contrast between the two can be measured in more than just distance and time. Cancun is a string of large resort hotels which did not exist prior to 1974 and which specialize in the expected. Tulum, on the other hand, was built late in the thirteenth century, during what is known as the Mayan post-classic period. With a little imagination and knowledge, the ruins become a giant puzzle waiting to be pieced together.What sets the site apart from other ruins in Mexico is both the fact that it is well preserved and it boasts its own, inviting beach.

Each Mayan city had a specific purpose, and Tulum was no exception. It was a seaport, trading mainly in turquoise and jade. As well as being the only Mayan city built on a coast, Tulum was one of the few protected by a wall. Made of limestone, the 784-meter wall encloses the site on three sides, is seven meters thick, and varies between three and five meters in height. No doubt this fortification helped preserve the seaport. After entering the ruins through one of five doorways in the wall, and we were  greeted by a field of gently-rolling hills, and black and grey stone ruins dot the sun-baked landscape. The most prominent among the remaining structures is the Castillo, or castle, which is perched on the edge of a 12-meter limestone cliff, overlooking the Caribbean coast.

Tulum remains popular because of its elegant setting on sheer limestone cliffs above the turquoise splendor of the crashing Caribbean, the only Mayan city built on the coast. After spending a good portion of the day there we still did not want to leave. It’s truly amazing. Next stop Chetumal! 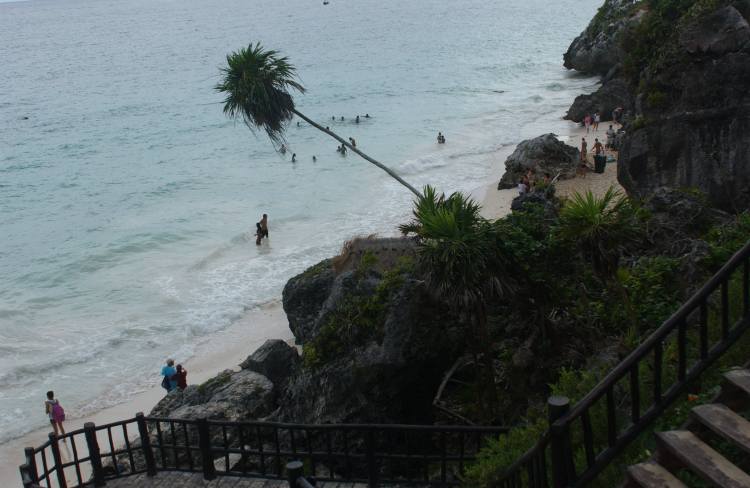