I practiced saying it over a hundred times, in many different accents and tones, and still couldn’t get enough of the way I loved hearing the name of the next city that we were approaching. “Scott” I would call over the radio. “Guadalajara is only one more hour” I’d say. “Scott”, do you think we’ll catch the rush hour traffic in Guadalajara?”  “Guadalajara, Guadalajara, Guadalajara!” I don’t know but it just sounds so exotic to me. However, I knew we were not in expedition mode any more since we left Barra de Navidad, the Rover was still running slow to the point we had to get in the far right lane and sometimes ride on the shoulder of the road going up hill. We were really riding on a wing and prayer trying to make it to the Land Rover dealer, and the closer we got the worse the Rover was running. Fuel mileage was deteriorating, the temp gauge was dancing around the danger zone and we were running on the shoulder of the highway trying not to get hit.  Things couldn’t have looked worst when we finally saw the sign welcoming us to Guadalajara. Now we just have to find the dealer.

Finding the dealer proved  not to be much of a problem, but now just getting there in the traffic was.  With a population of 1,564,514 it is Mexico’s second most populous city and it seemed to us everybody and their brother was out driving today. Since it was so late in the afternoon we decided that we’d find a camp ground in town, get a little rest and tackle this in the morning.

Lucky us we found a camp ground right on the edge of town. And as a bonus, just before turning into the camp ground area there was a huge assortment of eateries all within walking distance of the camp. We were really starting to like Guadalajara. After setting up camp, eating and figuring out a strategy to get over to the dealer without dealing with the massive traffic we called it a night. Now mind you that just earlier that day we where on the Pacific coast dealing with 90 degree heat and humidity and now we were in the mountains and the weather was considerably colder, like in the 60’s. It was time to break out the blankets in the tent, the sweaters or a coat to walk around in during the day which neither of us had, so we found ourselves driving around with the heat on and looking for warm clothes. It was so at cold night we had to keep all the flaps shut in both tents to keep the heat in, and I slept in my clothes in the sleeping bag. 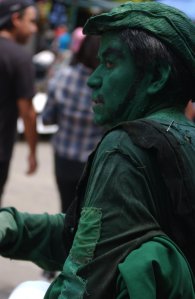